The Cynic’s Case For Voting 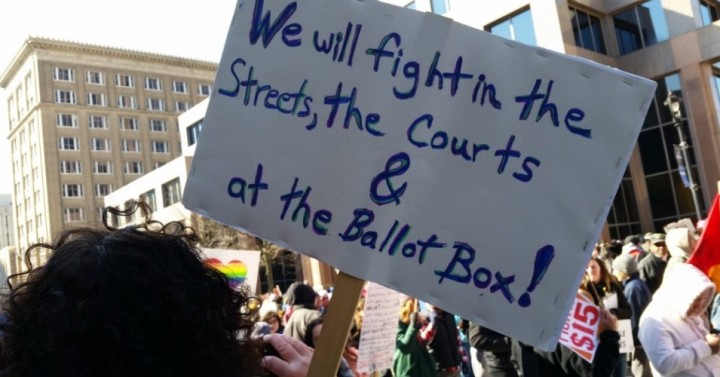 Note: this essay is lightly adapted from a recent edition of UNCLE DAD, a sporadic self-published DINFONTAY newsletter. Sign up here.

I never used to vote. The first time I ever voted was in the 2016 presidential election, when I was 28. That’s 10 years after when I could have started voting. I voted for a candidate I didn’t like, and frankly, it didn’t make me feel good. But it made me feel slightly less bad, which is a form of good, I guess.

The reason I didn’t vote for my first decade of eligibility was that I was an privileged shithead. This is a bit of self-flagellation, but also mostly true. I was (and am) a straight white guy with almost every advantage imaginable. I had never faced persecution or even much social adversity, beyond being made fun of in eighth grade for having a unibrow. (It was real, and spectacular.) I don’t remember feeling particularly entitled to these obvious social, political, and economic boons, but I certainly enjoyed their fruits. The system may not have been working for everyone, but it was working for me.

Things had (mostly) taken care of themselves in other facets of my life, and I assumed they would do so in politics, too. So instead of registering to vote, I went the other direction. I played the cynic. I rolled my eyes and gleefully walked past clipboard-wielding volunteers. I doubled-down when friends criticized me, rationalizing my complacency with the familiar, cringe-y pose of contrarian intellectualism. It doesn’t even matter, man. Democracy is broken. The electoral college, corporate donations, blah blah blah. I was the worst.

Hopefully, your voting record is a lot longer and less personally embarrassing than mine is. But maybe, against all odds, civic obligation, and observable truth, you believe (like I used to) that you don’t need to vote because things will take care of themselves. Or maybe, you think you’re white enough, male enough, straight enough, rich enough — whatever enough — that even if things don’t take care of themselves, you’ll be insulated from the consequences.

But don’t take it from me! Take it from an infinitely more illustrious David:

By all means stay home if you want, but don’t bullshit yourself that you’re not voting. In reality, there is no such thing as not voting: you either vote by voting, or you vote by staying home and tacitly doubling the value of some Diehard’s vote. — David Foster Wallace

In other words: there are bad people trying to screw us — yes, even you, Mr. Privileged White Shithead, Esq. — and your complacency allows them do exactly that.

When you look at it this way, the cynic’s case for voting is obvious. It goes something along the lines of: “Uh, fuck that shit, my dudes.” Status quo more like status no, amirite? (That sentence was embarrassing to write, but hopefully you get the idea. Don’t get screwed, get spiteful.)

The mid-term elections are coming up in a few short weeks. You may have heard about them. I recently moved to Charleston, South Carolina, so for the first time, I’ll be casting my ballot outside the reliably liberal enclave of NYC. Another DINFONTAY voting first. Because I don’t have a SC driver’s license yet, I wasn’t able to register online, so I had to drag my ass up to the county election headquarters in North Charleston. The idea of registering to vote in person — really, doing anything in person — fills me with a seething dread, but so has everything else for the past few years. Also, I don’t like getting screwed. So I went.

If you haven’t registered to vote yet, you probably still can. You might not even have to schlepp to an election office; many states let you do it online. Websites like Vote.org can help you check whether you’re registered, figure out what the cutoff date is in your state, and even process your registration.

…but that’s up to you. (I’m not going to get into the “why” for these issues here, but feel free to email me if you want to hear more.) Don’t get me wrong: I don’t think that voting in the 2018 mid-terms will immediately fix the various ills at work in our body politic. And I certainly don’t think I deserve any credit for finally realizing that being a privileged shithead was, well, fairly shitheaded and privileged of me.

Make sure you’re registered, and get out to the polls in a few weeks. Politics aren’t going to take care of themselves. Good people have to put skin in the game and take care of them together, otherwise those very same people are apt to get screwed. If you aren’t motivated by the merits of civic participation or the duty of democracy, do what I do — let selfishness and spite be your guiding light.

Plenty of bad people hope you won’t bother voting so they can keep screwing you. Don’t let them.