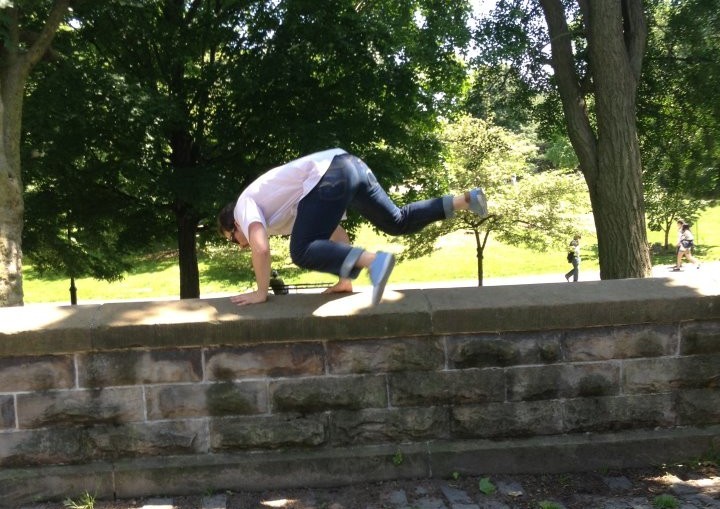 Note: this essay is lightly adapted from a recent DINFONTAY e-newsletter. Sign up here.

Yesterday was my last day at Thrillist. I’ve been working there for the better part of the past decade. How the time flies, et cetera.

At my five-year anniversary, I blogged a blog reflecting on my Thrillist career to that point. In the lede, I wrote: “I got hired in mid-October of that year [2010] as an editorial assistant. I figured I’d be there for nine months, tops.”

That’s true. I was 22 years old with no job experience and even less money. I just assumed that Thrillist would be the first of a half-dozen hopscotch squares I landed on in my early career while trying to “be” a “writer.”

Hell, right before Thrillist hired me, I nearly took a job writing technical marketing copy for a pharmaceutical marketing firm. I mean, just writing that sentence gives me hives now, but back then, I was eating 4-for-a-dollar pork & chive dumplings from Vanessa’s on Eldridge Street for two out of three meals a day and crashing on a couch at my increasingly exasperated buddies’ Chinatown loft. (Thanks Blake, Brendan, and Jeb!)

So, like… I had to seriously consider the pharmaceutical copywriting gig. Before anything else, Thrillist gave me an alternative to that very specific hell.

Media was a shitshow when I got hired 7.5 years ago. It’s a shitshow now. This is a nightmarish industry for a lot of people. I’ve seen a lot of friends at a lot of outlets (including Thrillist) fall victim to layoffs as everyone tries to figure out how to stay solvent and relevant an ecosystem dominated by Facebook and Google. But Thrillist has been a relatively safe harbor for me, and one where I’ve done almost all of my best work to date.

So why leave? Reader, it was just time to go.

(I realize that’s a tautology, but this is my essay. I can do whatever I want. Deal with it.)

I’m not taking another full-time job for now. I’m going to try do my own thing. Well, my own things. I’ll be freelancing as a writer & reporter and trying to land my byline in some white-whale outlets (if you know anyone who edits The Atlantic, put me in touch!) I’m doing some consulting work for my father’s company, which continues to be an incredibly rewarding experience. There are a couple still-under-wraps business ventures that I’ve been kicking the tires on for a while; now I’m going to try to make them real. Hopefully I’ll have more to share on that front soon, watch this space for more, blah blah blah.

I should say: I got to call my own number on this and leave on my terms, which is a privilege that plenty of folks in this industry (or any industry, for that matter) never get. Thrillist was really good about it, and I appreciate that.

Here’s a little Twitter thread of memories I put together (wherein “memories” are mostly “embarrassing pictures of me from old photo shoots”):

(after 7.5 years, i finally get to do one of these!) pic.twitter.com/DwEuQLGkjY

That’s all for now. I’m still in Brooklyn for the foreseeable future, so I’ll be around. Maybe we’ll get a drink! Until then, you can follow my #lifestyle adventures on Instagram, or engage with my berserk rants about the state of American infrastructure on Twitter.

If you’re an editor who’d like to hire me, a friend who’d like to reconnect, or a random stranger who just signed up to this email list to hate-read my occasional dispatches, please reach out: dave@dinfontay.com. I’d love to hear from you.