Live from the Brickyard with the Miller Lite #2Crew 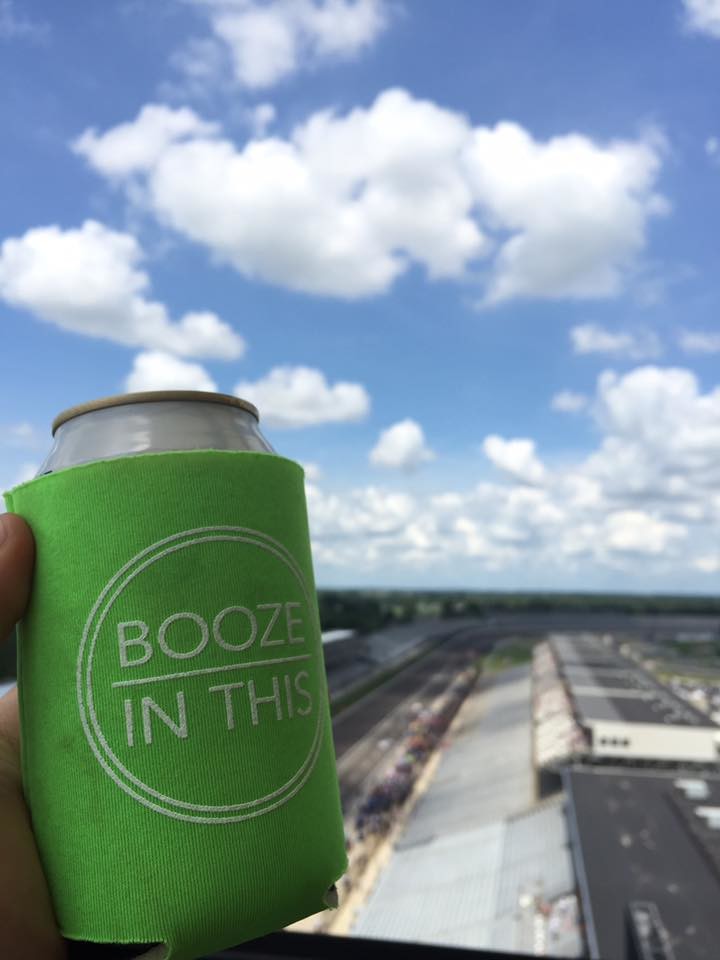 I almost never go on press junkets anymore, because most of them are tedious, catastrophic, or (somehow!) both. But I’ve never been to a NASCAR race in my life, so when Miller Lite invited me to be an honorary pit crew member for their Penske #2 car in the Brickyard 400, I accepted with clear eyes and a full heart. Or something like that. And so, on a hazy day in late July 2016, I boarded a flight headed to Indianapolis, the city of   cars that go fast, and people who love them.

(Disclosure: Miller Lite paid for everything on the trip, but not for this post. I’m just writing this because I’m bored and have a bunch of sweet photos that I don’t know what to do with.) 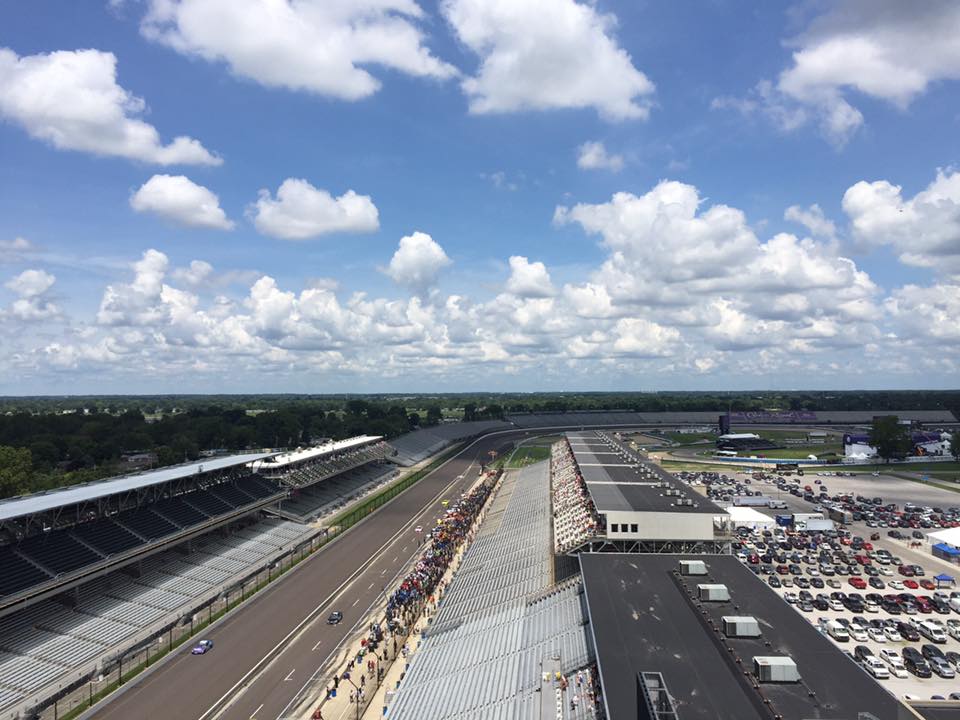 They call Indianapolis Motor Speedway “The Brickyard,” because it used to be laid completely in brick. Which is sort of insane, considering bricks buckle, warp, and weather over time, and old-school race cars had only the most rudimentary suspension systems, if at all. One of our first stops on Saturday was to the track’s hall of fame, an uninspiring gray cement bunker in the infield, where dozens of such ancient speedsters have come to their final resting places. 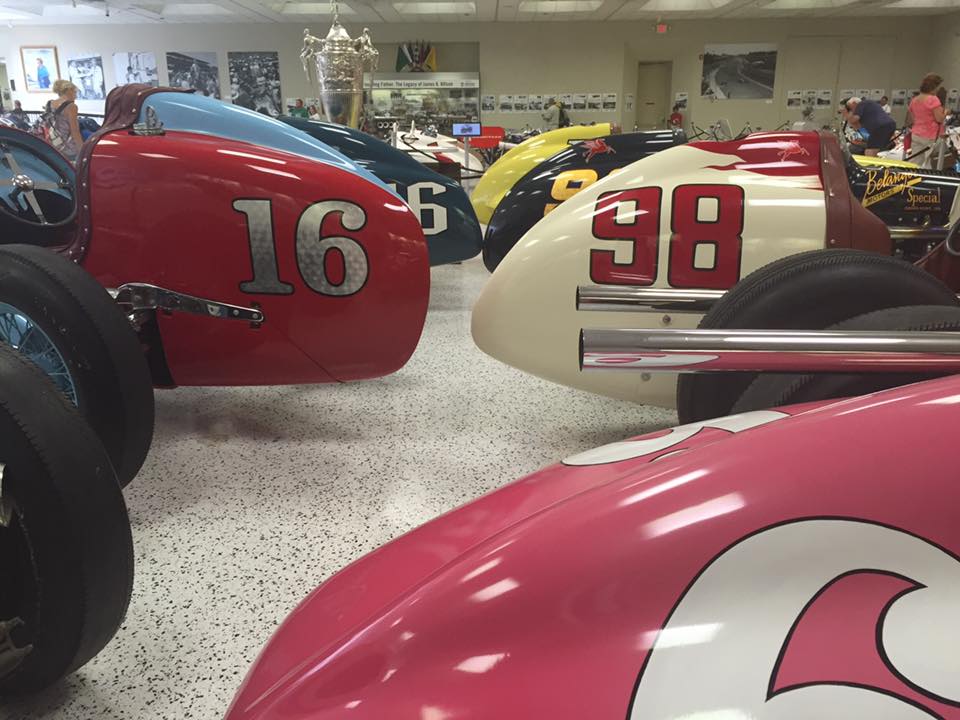 Amongst the 100-strong collection of classic race cars, the hall of fame has some serious pieces of history, including Ray Harroun’s Marmon Wasp, which won the 1911 Indianapolis 500 in part thanks to its then-groundbreaking rearview mirror.

(All the other cars had two seats — one for the driver, and one for the ride-along mechanic, who acted as a spotter. Harroun bolted a back-facing mirror onto his hood, dropped the second seat, and beat the heavier field with ease. Soon, everyone had adopted rearview mirrors as the standard. Suck it, ride-along mechanics!) 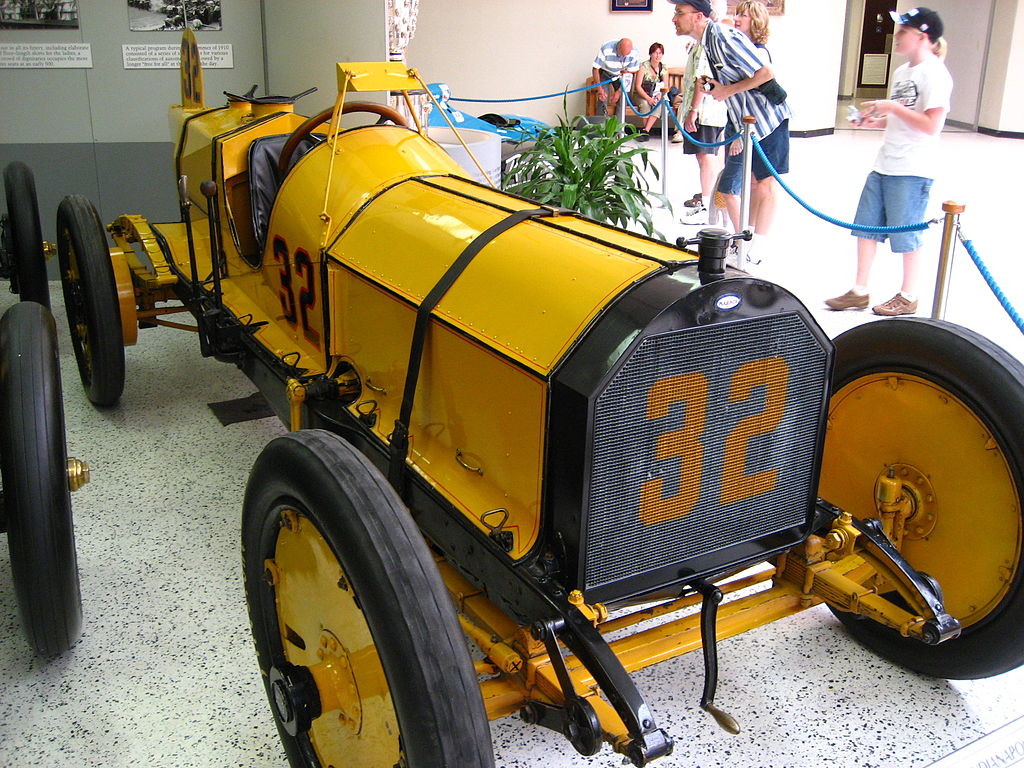 After the museum, we headed over to the haulers, which are the massive, kitted-out trailers that each team tows to all 38 racetracks every season. 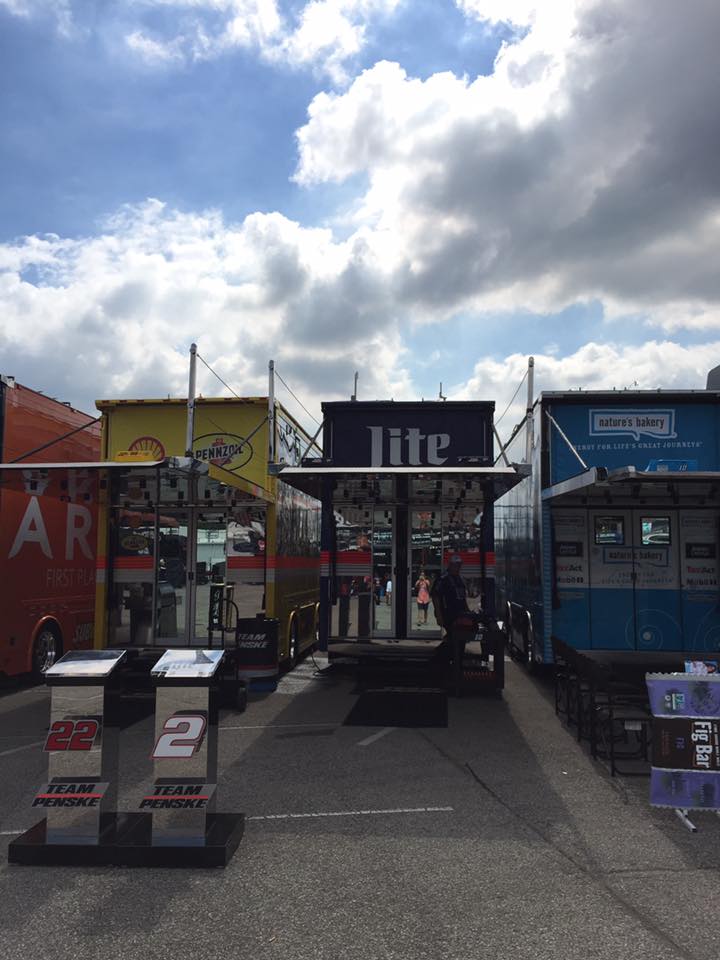 Parked in order of the points standings of the racecars they haul, these 18-wheelers are trucks in name only. Inside, they have full, engine-independent air-conditioning, electricity, running water, indoor plumbing, and so forth. They feel like weirdly laid-out RVs, until you open up one of the cabinets and discover rows upon rows of neatly stacked suspension coils, shims, or brakepads. 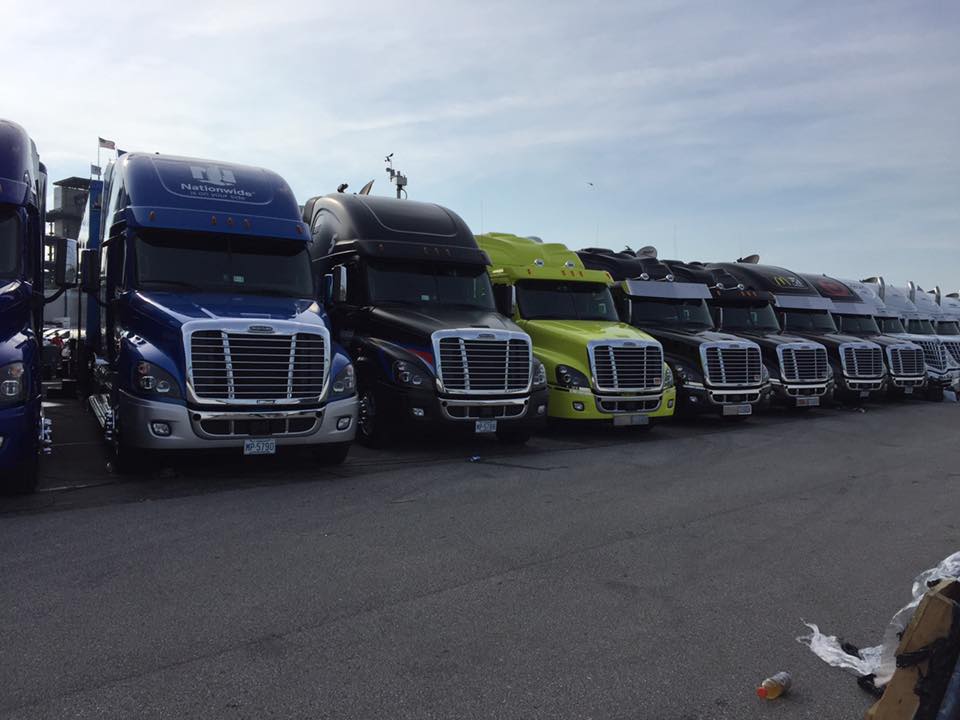 We hung out in the Miller Lite #2 hauler with Joey Meier. He’s both the race spotter AND the private airplane pilot for driver Brad Keselowski, and with about 24 hours to go until the green flag, he was kind enough to answer all my stupid questions about NASCAR. 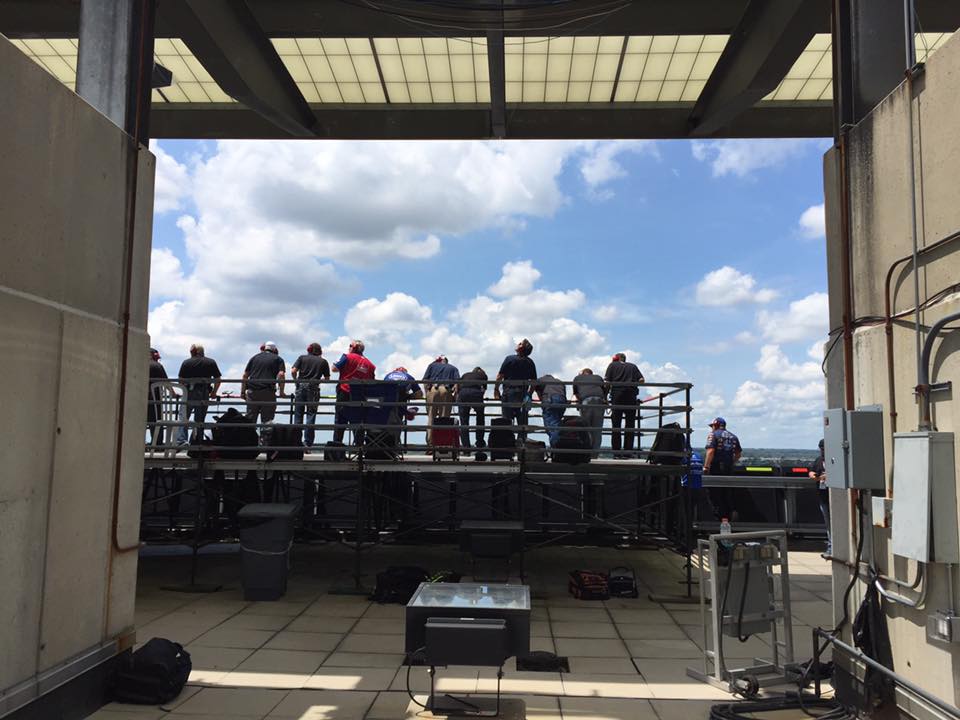 Race spotters are the modern-day answer to Harroun’s rearview breakthrough; they perch high above the track during the race and relay shitloads of information to their driver via analog radio. (At Indy, the high point is the Pagoda, a massive, 7-story central tower that hulks over the start/finish line in the infield, opposite the grandstand.) Who’s passing where, which car pitted when, how the rear tires look coming out of Turn 3… all that and much more. It’s a lot of responsibility, and it translates into a lot of talking. As such, Joey has picked up a nickname in the pit: Joey Talks-a-Lot. 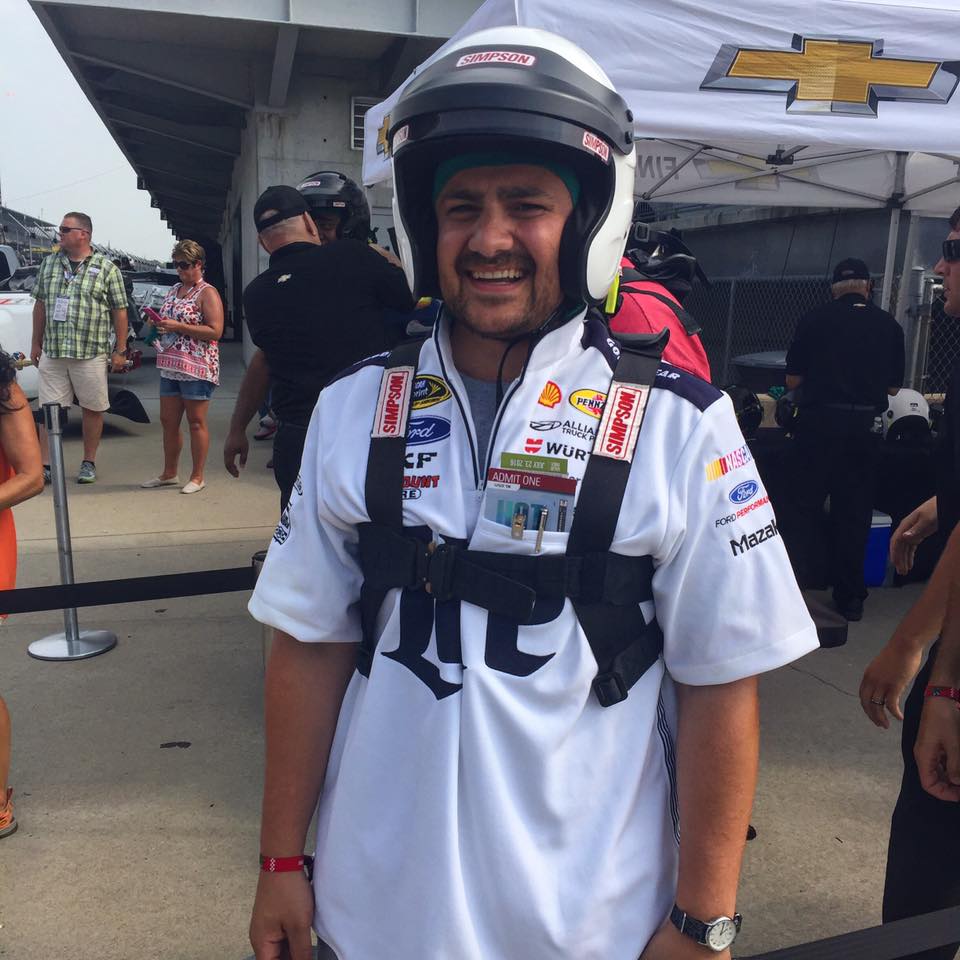 Sunday was raceday. We got to the track early, and headed to pit row. Because I was a sponsor’s guest, I had what’s called a “hot pass.” What’s a hot pass? So glad you asked! Or… uh, I asked. Rhetorically. Anyway! A hot pass gets you into the garage and pit areas when the engines are hot (i.e., on), whereas a lesser “cold pass” grants access only when the engines are… well, you get it. The point is, I was fucking Important™, alright?

So Important™, in fact, that Miller Lite had hooked me up with a morning ride in an official pace car. There I am above, looking terrified before hopping into a racing-package Chevy SS to be whipped around the oval at 110mph 10 feet from the wall. (The actual Sprint Cup cars do around 200mph and get within inches of the wall, and one another. But who’s counting?) 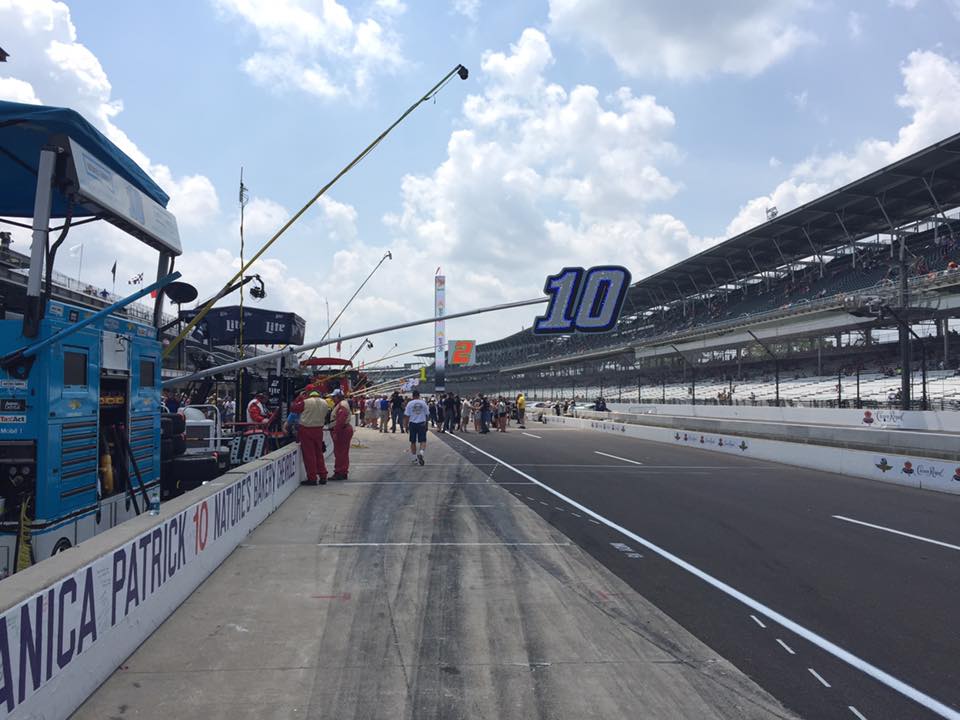 After that, it was time to get down to the pit box. There are 40 pit boxes at the Brickyard 400. The ones in the very front and the very back of pit row tend to be the favorites, because they allow the clearest path in and out. (Passing on pit row is forbidden, and the speed limit is 55mph. Precious seconds spent trying to get around the car pitting in front of you, or slowing down as a car cuts you off could cost you the race.) The slots are chosen by draft based on how the driver qualifies the day before; Keselowski had qualified well, so the #2crew had a pit box that everyone was pleased with. 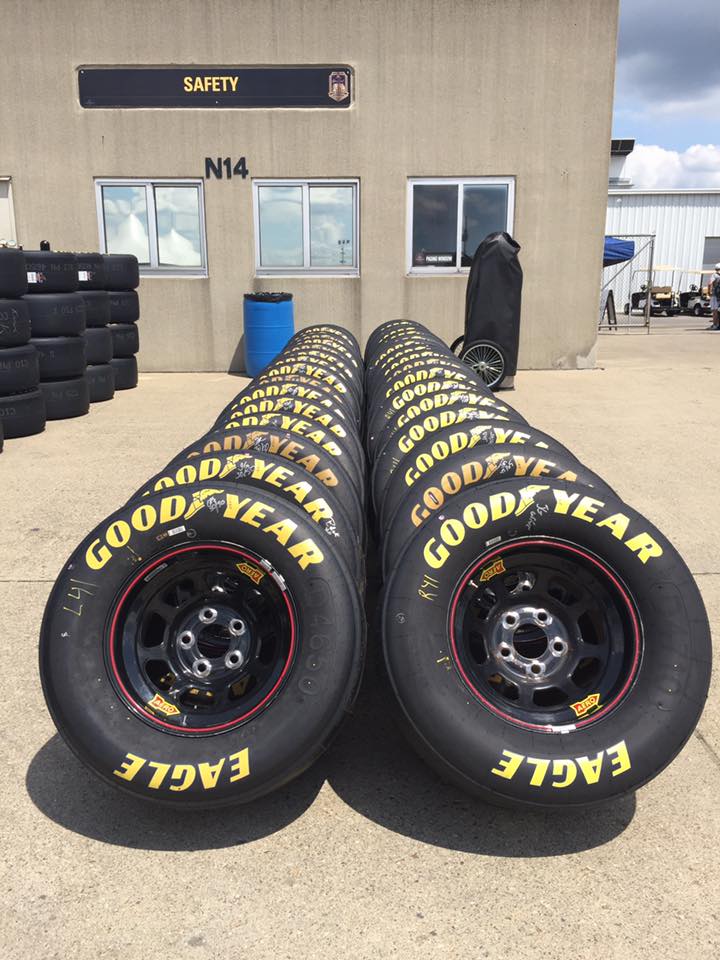 Here are some fucking tires. These particular fucking tires were located in the rearward garage area, but in the pit, there are shitloads of fucking tires just like these. See those little silver rings around the inner rims? Those are imprints from lug nuts, which bolt the wheel to the chassis. To save time, every pit crew has a dude whose sole raceday assignment is to sit in the 90-degree heat glueing lug nuts into place. I get the sense that this dude’s job sucks. But it’s also critical, because when the guys who go “over the wall” mount the new wheels on the car during a stop, it would waste valuable time to be fumbling around with the bolts & nuts. This way, they’re already in place to be hit with a super-powerful pneumatic drill.

It should go without saying, but pit stops happen fucking FAST. This is true across motorsports, and it’s true in NASCAR, too. Here’s a video of the #2Crew getting Keselowski in and out a couple years ago. Four tires and gas takes around 12 seconds, if the crew is in synch.

A while ago, teams began realizing that if their pit crews were more athletic, they could pit faster. Since then, it’s been a sort of pit-row arms race to find the most freakishly athletic dudes (there are also a few women in the pits, but not many) who ALSO know how to work on cars. The #2Crew crew chief told us that they’d recently begun recruiting seniors from lesser D1 football programs who had no intentions of going to the NFL but still wanted to compete professionally.

Correspondingly, the pit was full of swarthy linebacker types wearing team-issue fire suits on Sunday at the Brickyard. Pre-race, they stretch, listen to pump up music, and talk shit just like you might see on a basketball court during warmups. One crew member started ripping out chin-ups off the ledge of the team trailer, just for the fuck of it. I felt bad about myself. 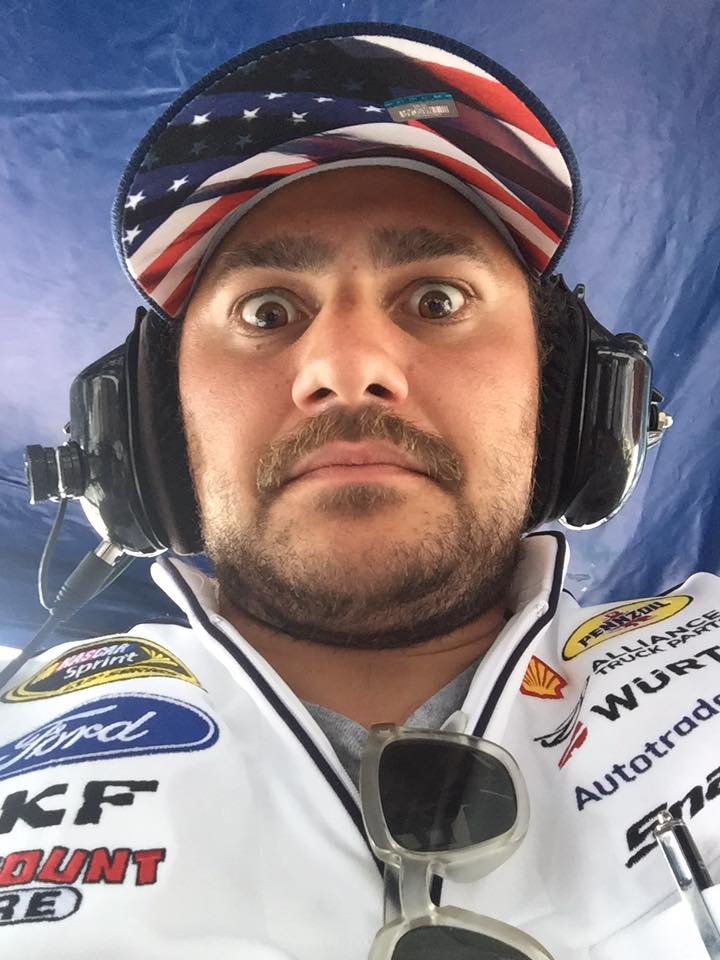 Soon, I felt great about myself, because the race was FUCKING ON, BABY! When you’re sitting in the Penske pit box, photography is prohibited, so I ripped a quick selfie, put my phone down, and listened to the comforting chatter of Joey-Talks-A-Lot hum over the team radio.

Brief summary of the race itself, which almost felt like an afterthought: it was hot, it was loud, and Keselowski looked solid but didn’t place. Despite being enthralled with the inside access, being circled endlessly by technicolor land speeders is only compelling for so long. After the first couple pits, we retired to a Miller Lite party deck in the infield, where I spent about fifty laps in the infield whacking down a bunch of non-alcoholic banana daiquiris and listening to Cher’s greatest hits. 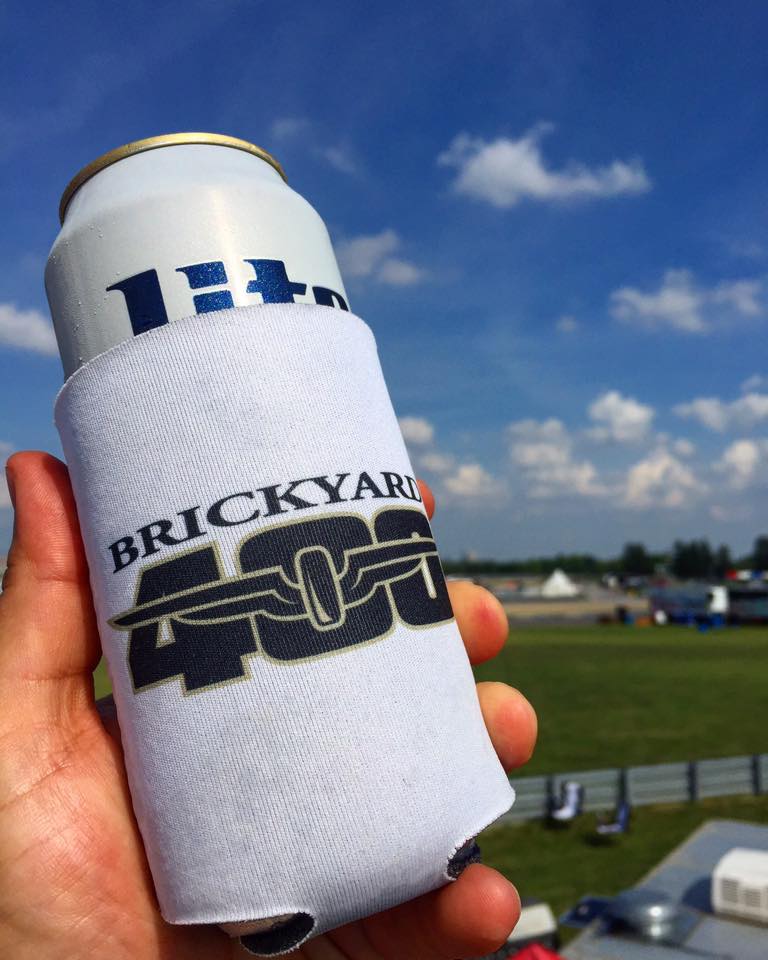 All photos are mine except for the Marmon Wasp. I weirdly don’t have a photo of that car, so the photo here is from Wikipedia.