Why Does Gawker Matter? 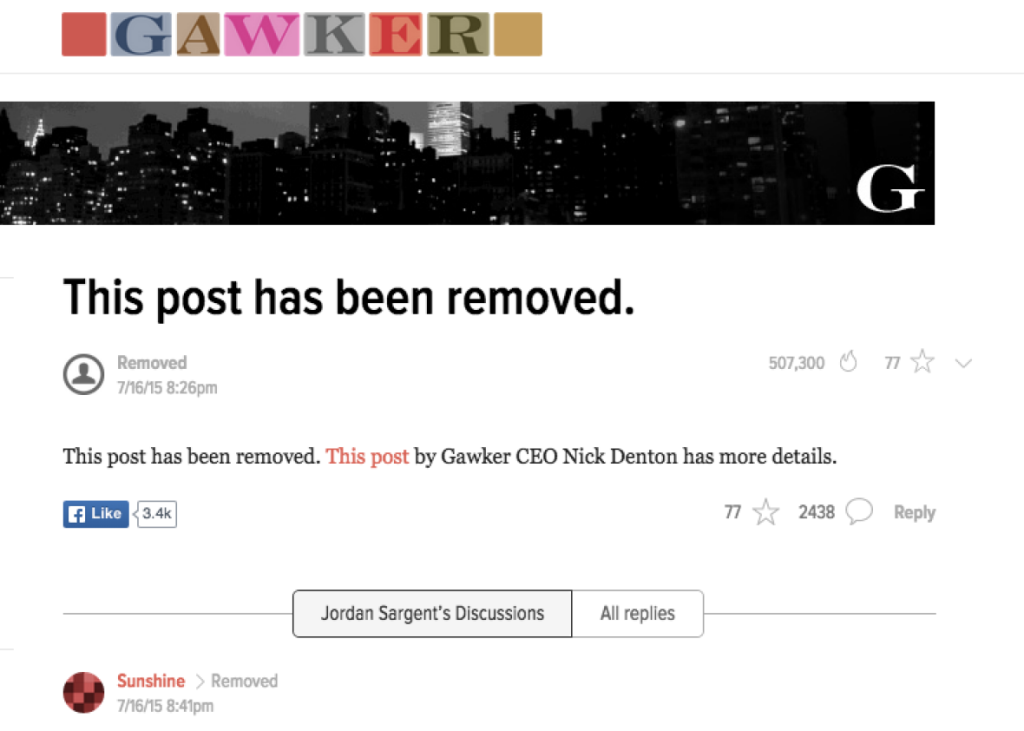 Why does Gawker matter? I never really knew. Hell, I still don’t, and I read the site—and Deadspin, and Jezebel—daily. When this whole shitshow broke wide open a few weeks ago, I had just come back from birthday dinner with my girlfriend. I spent an hour on Twitter, watching the chaos unfold. My girlfriend wanted me to come to bed, but I couldn’t tear myself away from the schaedenfraude of media types reveling in a bully’s setback, or the commentariat/peanut gallery of current and former Gawker Media writers and editors mulling it all over. It was hypnotic.

Admittedly, this is an odd way to spend a birthday, even for me. But that’s the hold Gawker has had over me. When I moved to New York in the summer of 2010, I had no fucking clue what being “in media” meant. (I still don’t, really, because the meaning changes every day.) I was hustling for jobs, getting stupid internships that didn’t go anywhere, and wondering if I’d ever be any good at this whole “writing” thing. (I still wonder this.) And so, with nothing else to do at night besides drink cheap beer and cruise Craigslist for jobs in the sweltering Chinatown loft where I’d been couch-surfing, I found Gawker.com.

Oh man, was it great. Back then, when I was an unemployed blogger desperately trying to avoid an agency job, Gawker.com was the definition of being In Media™. Its writers were — and still are, for the most part — these swashbuckling snark-monsters who seemed to care about journalism more (or, in hindsight, more vocally) than the journalists they were lobbing criticism at. It was weird and navel-gazey, and self-referentialist to a fault.

Gawker.com’s tangled web of gossip & news was punctuated by personalities who seemed important just by the virtue of being mentioned by Gawker.com. Julia Allison is the most widely cited example of this (in a younger internet, her rigorous brand of self-promotion — and their coverage of the same — was derisively called being a “fameball”), but there were plenty of others. The coverage was so unabashedly inside-baseball that it effortlessly convinced me of its own gravity. Hours later, I’d emerge from a stupor, wondering why the fuck I’d just read five blog posts about the CEO of Vimeo’s party in Sag Harbor. Or something. It felt like being around the water-cooler of a job I wanted, before I even knew what that job was. Reading Gawker.com felt like being In Media™.

Fast forward five years. I’ve been working at Thrillist pretty much uninterrupted since those sweaty drunk evenings in Chinatown. By virtue of where my paychecks come from, I guess I’m In Media™ now. I still occasionally read Gawker.com — JK Trotter’s TKTK blog coverage is one of the most thorough-but-accessible sources of media criticism out there, and I love it — but these days I mostly gravitate towards Jezebel’s features and Deadspin’s non-sports coverage. The meticulous, obsessive, incestuous gossip is mostly gone now, replaced by more thoughtful essays, newsy fast-follows, and re-contextualized viral content from reddit and beyond. The self-validating churn of the In Media™ echo chamber has slowed to a trickle. A newcomer to Gawker.com now would be forgiven for thinking it’s just another publisher trying to figure out a balance between traffic-driving content and meaningful journalism.

So, back to the question. In the wake of a toxic piece that precipitated the resignations of both the company’s executive editor and Gawker.com’s editor-in-chief, and has reportedly left its editorial team in disarray, friends and younger coworkers have asked me “Why does Gawker Media matter?” I think this is the wrong question. In any event, the answer is obvious. The company’s journalism (the piece in question, and a few others, excepted) and writing talent is what makes it a force In Media™. I hope they can stop the bleeding over there and figure shit out, because some of my favorite bylines appear on the company’s various sites.

But the question “Does Gawker.com matter?” is a tougher one. I don’t have the answer now, because I never really did. I’m inclined to say it never mattered, but that wouldn’t really check out; after all, I’ve been reading it for half a decade. I don’t know why any of this ever mattered, other than the fact that it was on Gawker.com. But the internet is way bigger now, and I’ve been around for a little while longer. It’s not as easy to get lost in the echo chamber as it used to be. I’m not quite as desperate to feel like I’m inside-baseball, because I just sorta am.

I guess maybe, Gawker.com never mattered, and still doesn’t, but I read it because it makes me feel like being In Media™ matters to anyone else besides the people in it. This is admittedly weird and pathetic, but then again, so is scrolling through a Twitter feed on your own birthday, watching a trainwreck unfold that has nothing to do with you.